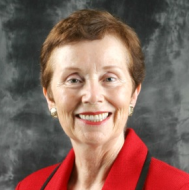 Accompanying Caroline's photo in the 1961 Priory yearbook is the following description: "The beauty of her soul enhances the greatness of her mind." Little has changed since her days as a graduating senior.

Caroline earned a Bachelor of Arts degree from Stanford University, a Master of Arts from San Francisco State University, a Master of Social Work from University of California, Berkeley, and a Ph.D. in Instructional Design for Online Learning from Capella University. She has taught at an inner-city middle school in San Francisco and worked as a social worker and educator in Hawaiʻi. She would go on to oversee two schools in Hawaiʻi, the first as Head of School at Christian Academy.

Caroline returned to The Priory in 2000 to become the first woman to lead our school, and remained through the 2004 academic year. During her tenure as our Head of School, enrollment increased 13 percent, donations tripled, and Hawaiian studies received a more prominent role in our curriculum. The Priory also became the first school in the state to implement a wireless laptop computer program for grades Kindergarten through 12.

"Queen Emma shaped my life, though I didn't know it when I entered St. Andrew's Priory as a high school sophomore. It was only after studying the Hawaiian language that I returned as Head of School and learned how her values and her vision had shaped so many women's lives," said Caroline.

Caroline has an extensive record of community service in the areas of education, social services, and health and wellness. She has served on the boards of the Girl Scouts (as President, 2006-08) and Salvation Army (as Chair, 2008-10) as well as Friends of the East-West Center, Hawaiʻi Justice Foundation, Honolulu Rotary, Punahou School PFA (as president,) and The Queen's Health Systems (as compensation chair).

She is a Pastor at New Life Church Honolulu and author of the book, Catch the Wave of Transformation: From the Shores of Hawaii. She currently serves as the Head of Transform Our World's online university. Caroline is married to Dr. Francis S. Oda. They have two adult children, Reid and Nalani.