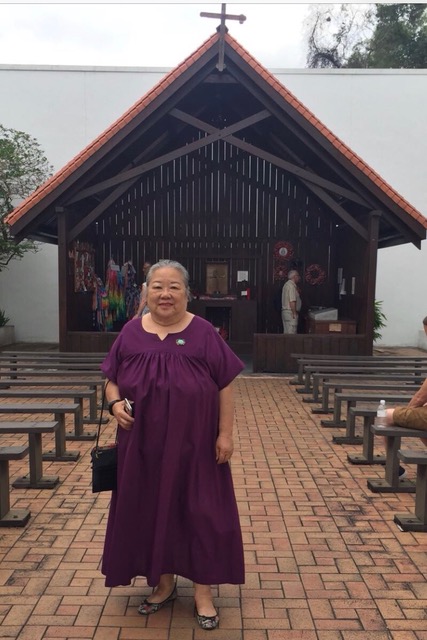 Sprightly and gay, the best of companions.

This line is used to describe Pamelia Chong Lee in The Priory's 1960 yearbook, next to her senior portrait. It is no surprise that she is remembered in such a way.

Recalling her time at our school, Pamelia says,

"(The) Priory was wonderful, because it gave us space to grow. To grow and allow our talents to flourish. I could dream, read magazines I like, pursue my interests, be creative, and grow at my own pace. Today's pace is fast changing. One needs to be creative, thinking out of the box is important, essential."

After her days at The Priory, Pamelia went on to study at the University of Hawaiʻi, majoring in Comparative Religions. Shortly after her marriage in 1966, Pamelia moved to Singapore, her husband's homeland. Though she says that Hawaiʻi is paradise, she recalls that transplanting into this environment suited her best. It was also a fitting place for her to grow her niche: her passion for tourism and the tourism industry.

Her career took off in 1978 when she began working with the Singapore Tourism Board (STB). Pamelia headed the Marketing Division for eight years, before starting the Product Development Division. This section of the STB allowed Pamelia to hold chief coordination of the S$1 Billion (US $760 million) Singapore Tourism Product Development Plan. She contributed to preserving the Singapore River, the historic Chijmes building, the Raffles Hotel, Chinatown, Little India, and various other sites during her time in this position.

As a member of the Singapore River Committee, Ms. Lee brought life and activity back to the river. Pamelia also oversaw the rebuild of the Changi Chapel Museum, which is known for its award-winning architecture. To further her knowledge and experience with the Singapore tourism scene, Pamelia was invited to serve on the Board of Directors of the Urban Redevelopment Authority of Singapore, as well as the National Heritage Board. She continued to work with her passion for heritage conservation, with her efforts receiving the Public Administration Medal (in 1989) and a Public Service Medal (in 1997) from the Singapore Government.

Adding to the opportunities that Ms. Lee received in Singapore, she was invited to arrange tourism studies for places such as China, Cambodia, Laos, Mauritius, and Myanmar. Pamelia also became involved with tourism in the cities of Wellington and Malacca through the Pacific Area Travel Association's task forces.

In recent years, Pamelia helped build Hua Song, a museum collection that tells the history and stories of Chinese culture. In 2004, her duties as the Senior Consultant to the Singapore Tourism Board led her to handle the treasures of the 9th century Tang Dynasty shipwreck, which held over 53,000 artifacts. That same year, Ms. Lee wrote the book, "Singapore, Tourism, and Me", which describes her journey with the Singapore tourism industry. In 2014, she helped write, "The Greening of Singapore, A Legacy of Lee Kuan Yew".

Even though she's made her home in Singapore, Pamelia has never forgotten about her days at The Priory. She recently gave our school a copy of her book, "Singapore, Tourism, and Me". Within it, she signed:

"Although I ended up living on The Great Continent of Asia, the goodness gained from The Priory stayed with me all the days of my life. For which I am and will always be grateful."

Pamelia Chong Lee currently resides in Singapore with her husband, Dr. Lee Suan Yew. He is the younger brother of Lee Kuan Yew, the former Prime Minister of Singapore. She has four children, and four grandchildren.