A Brief History – Courtesy of The Cathedral of St. Andrew

On January 2, 1836, Fanny Kekelaokalani Naea gave birth to a daughter, Emma.  Fanny was the eldest daughter of the High chiefess Kaoanoeha, Daughter of Keliimaikai 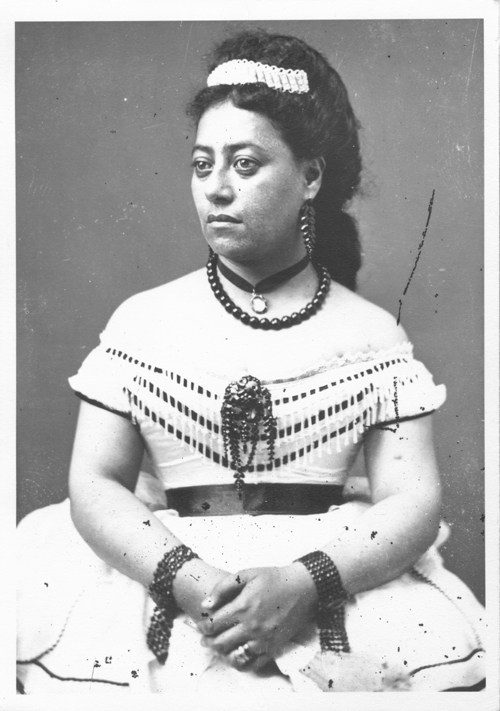 brother of Kamehameha the Great, and her husband John Young, a British sailor who became an advisor to Kamehameha the Great.  In time honored Hawaiian fashion, Fanny gave her daughter to her sister Grace, wife of Dr. T.C.B. Rooke, to be raised as her own hanai daughter.  Thus Emma, with roots securely grounded in the Ali’i was brought up in the household of an English physician with all the advantages of a young English lady.

Emma’s earliest education at home came from her father, with whom she learned to read from The Book of Common Prayer, so that by the age of six when she was enrolled in the Chief’s Children’s School (or The Royal School) she was an accomplished reader in English.  With only fifteen other students, the Royal School, under the direction of the Rev. Mr. and Mrs. Cooke, educated the select children of the Alii of Emma’s generation, five of whom would become rulers of Hawaii in their own right.  Her education was continued under the direction of a governess, Mrs. Sarah Rhodes von Pfister, rounding out a rudimentary knowledge of French, Geography and History.  At the same time Emma became a proficient assistant to her father’s medical practice.

On June 19, 1856, Emma became the bride of Alexander Liholiho, King Kamehameha IV, with whom she had attended the Royal School.  Alexander, a grandson of Kamehameha the Great, acceded to the throne on January 11, 1855; he and Emma were married at Kawaiahao Church in an Anglican ceremony conducted by the Rev. Mr. Armstrong, who had agreed, in the absence of an Anglican priest, to use the Church of England rite requested by the royal couple.  This royal wedding, the first ever to be witnessed by the Hawaiian community, was an occasion of great celebration and hope for the future.

On May 20, 1858, Albert Edward Kauikeaoli Leiopapa A Kamehameha was born, and with the consent of the Privy Council the child received the title of “His Royal Highness The Prince of Hawaii.”

From the time of their marriage the King and queen had been intent upon inviting the Church of England to send a mission to the islands.  With the encouragement and

assistance of Robert Crichton Wyllie, Hawaiian Minister of Foreign Affairs, negotiations were begun which resulted in the establishment of a missionary bishopric rather than only a chapel with a clergyman.  On December 15, 1861, with the consent of Queen Victoria by license to the Archbishop of Canterbury, Dr. Thomas Nettleship Staley was consecrated “The first Bishop of the United Church of England and Ireland in Hawaii.”  As part of the negotiations the American Episcopal Church was also consulted, and its support given through the offices of the Bishop of California.  In the meantime Queen Emma and King Kamehameha IV were actively facilitating the establishment of the mission in Honolulu by providing a site for the new cathedral and raising funds for the support of the church.  In addition they happily anticipated the baptism of their son upon the arrival of the new Bishop, especially as Queen Victoria had consented to be his Godmother.  In August of 1862, the four-year-old Prince became ill and was hastily baptized in the presence of Queen Victoria’s proxy, Commissioner William Synge, his wife and Prince Lot Kamehameha, his uncle, before he died.  Upon his arrival in November Bishop Staley baptized Queen Emma, and confirmed the King and the Queen on November 28, 1862.  One year later, on November 30, 1863, the Feast of St. Andrew, King Kamehameha IV also died, a victim of recurring asthma.

The Dowager Queen Emma spent the rest of her life actively pursuing the three major interests she had shared with her husband: health care for the Hawaiian people, education for young Hawaiian ladies, and the care of the Anglican Church in Hawaii.  Early in her career as Queen, Emma became instrumental in soliciting support and funds to create a much-needed hospital to serve the health needs of the Hawaiian population which was under constant threat from the introduction of foreign disease.  Hale Mai O Ke Wahine Alii (Hospital of the Women Chief), more commonly known as The Queen’s Hospital, was dedicated in July 1860 by King Kamehameha IV in honor of the work of his wife.  Queen Emma nurtured the hospital with her time and her resources.  Having had the best of education available, Queen Emma was intent also on raising the awareness of Hawaiians through education to cope and prosper in their changing world.  To this end she was instrumental in establishing St. Cross School, Lahaina (1864) and St. Andrew’s Priory School Honolulu, (1867) where Hawaii’s girls might receive “the very best in Christian culture” on a par with boys, and “be trained in nursing the sick and as children’s nurses, so as to prepare them to be wiser mothers and wives.”  Not only did the Queen take an active part in the planning and building of the Priory School, she sought out girls of Hawaiian ancestry, who might not know of the Priory and encouraged them with personal scholarships to attend school.

Queen Emma’s most challenging role for the new Anglican Church in Hawaii came, when, with the encouragement of King Kamehameha V, she traveled to England to raise

funds for the new Cathedral, to commission architects to design it, and to arrange for the acquisition and cutting of stone which would create the initial phase of St. Andrew’s Cathedral.  Aided by her friend, Jane, Lady Franklin, and Emma’s own close connection with Queen Victoria, the Queen succeeded in raising enough funds to accomplish her task while carrying out, at the same time, important diplomatic services requested by King Kamehameha V.

Queen Emma made one overt political statement in a life otherwise devoted to health care, education, and the Church.  In 1874, she announced her candidacy for the throne upon the death of King Lunalilo (February 3, 1874) in opposition to Col. David Kalakaua.  In a short and furious election campaign of nine days, Queen Emma decried the pro-American posture of her opponent and was defeated.  Upon the election of King Kalakaua, Emma offered him her loyalty and support to unite the Hawaiian community for their common preservation.  From this point on until her death on April 25, 1885 (The Feast of St. Mark) Queen Emma concentrated on the good works for which she is known to this day.  The following excerpt from Victorian Visitors, by Alfons Korn, sums up Queen Emma’s later years: “During the 1870s and early 1880s Emma became more and more the Hawaiian matriarch…she belonged thoroughly to her people in a manner befitting a queen who in her lifetime had already become a heroine in story and song…all growing things seemed to answer to her knowledge and labour and many a once barren spot sheltered today by Monkey Pod or Royal Poinciana owes its present shade to seed or parent stock tended by her hands…And not only in her prayers or by her gardening, but also at those times when she visited the wards of the hospital in the midst of the Pacific which bears her name, Queen Emma fostered the life of Hawaii in every form.”