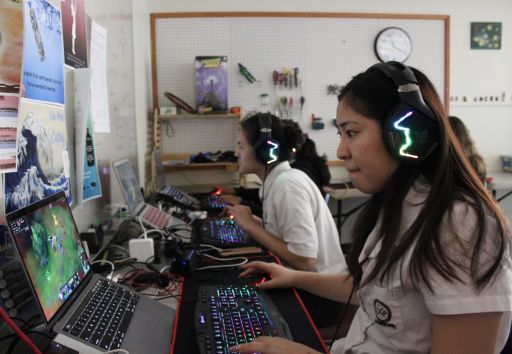 Electronic Sports (eSports) is a sport offered at St. Andrew's Schools where players compete in a single game against multi-players from other schools. eSports also exists in collegiate level with dozens of varsity eSport teams across the country and at its highest level, there is a professional league that functions similarly to traditional professional sports such as the NBA. According to CNN, eSports is a billion-dollar industry with hundreds of millions of fans and spectators. While professional and collegiate players can compete in several different tournaments, the Hawaiʻi private school teams, which operate under the Interscholastic League of Hawaiʻi (ILH), can only enter a handful of them, such as Fortnight, League of Legends, Rocket League, and Smite. The St. Andrew's Schools team participates in League of Legends, which is one of the biggest online multiplayer games and is free to play. This team is unique in that it is the only all-girl team in the nation. Led by Coach Danelle Landgraf, who is also the school's networking administrator, was recently recognized by KSSK's morning show as the "Coach of the Week." Team captain, Kamaehukai Delude, always enjoyed playing video games growing up and is happy to be a part of the team. "When Mrs. Landgraf proposed the idea of starting an eSports team, I jumped right on board. I enjoy video games and was excited about the idea of playing video games at school. I also wanted to introduce other girls at our school to it," said Delude. The team was excited for their coach's recognition which was aired live on the Perry & Posse morning show on KSSK-AM and KSSK-FM and heard by several parents during their morning commute. "Ms. Landgraf deserves the honor. She is a great coach and teacher," said Delude.