request info
A Day of Recognition and Celebration 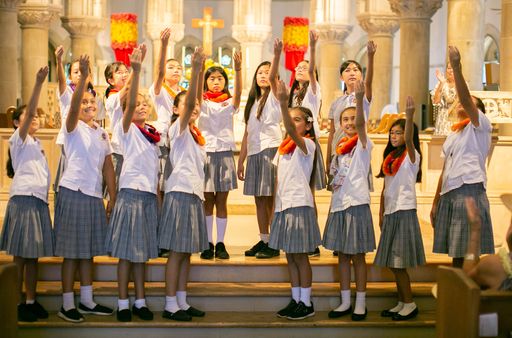 Friday, May 31 was a day packed full of celebrating students in grades K-12 for their hard work and perseverance throughout the 2018-19 school year. Students in The Prep, The Priory Lower School and The Priory Upper School were honored in front of their families, classmates and faculty at three separate awards ceremonies that showcased examples of students living up to our school's motto to Kulia i ka Nu'u – Strive for the Highest.

Festivities Begin with The Prep
The day got underway with The Prep Awards and Recognition Ceremony in The Cathedral of St. Andrew. Parents and family members of boys in grades K-4 joined their sons in the Cathedral to recognize a year of learning and growth.

"One of the best things about St. Andrew's Schools is our close-knit community and we are so glad that you can be with us today to celebrate your sons," said The Prep Principal Winston Sakurai, Ed.D. "This intimate setting that we have here at the school allows teachers to know students andstudents to know their teachers. Your sons are budding engineers, scientists, mathematicians, legal experts, businessmen, artisans and more. Above all, they are becoming compassionate and loving human beings."


Rounding out The Prep awards was the induction of the 2019-20 student council. Outgoing members were recognized and then the incoming officers were sworn in by taking the student council oath. Congratulations to The Prep's next group of student leaders: Chip Watts, president; Noah Baloran, vice president; Neil Sehgal, secretary; Quinn Yamamoto, treasurer; and Ronin Halliday, historian. The ceremony concluded with a beautiful rendition of "'Ōiwi Ē" performed by all students in The Prep.

Following the awards ceremony, parents accompanied their sons to their classrooms to view their work from the school year at The Prep's Exhibition Fair. Projects ranging from art creations to science projects filled the classrooms as eager students excitedly shared them with their families.

"These awards acknowledge our schools' values of pono – the courage to do what is right; ʻimi naʻauao – seeking wisdom and knowledge, and hoʻomanwanui – being steadfast and patient in our learning and challenges," said Mrs. Bailey-Walsh. 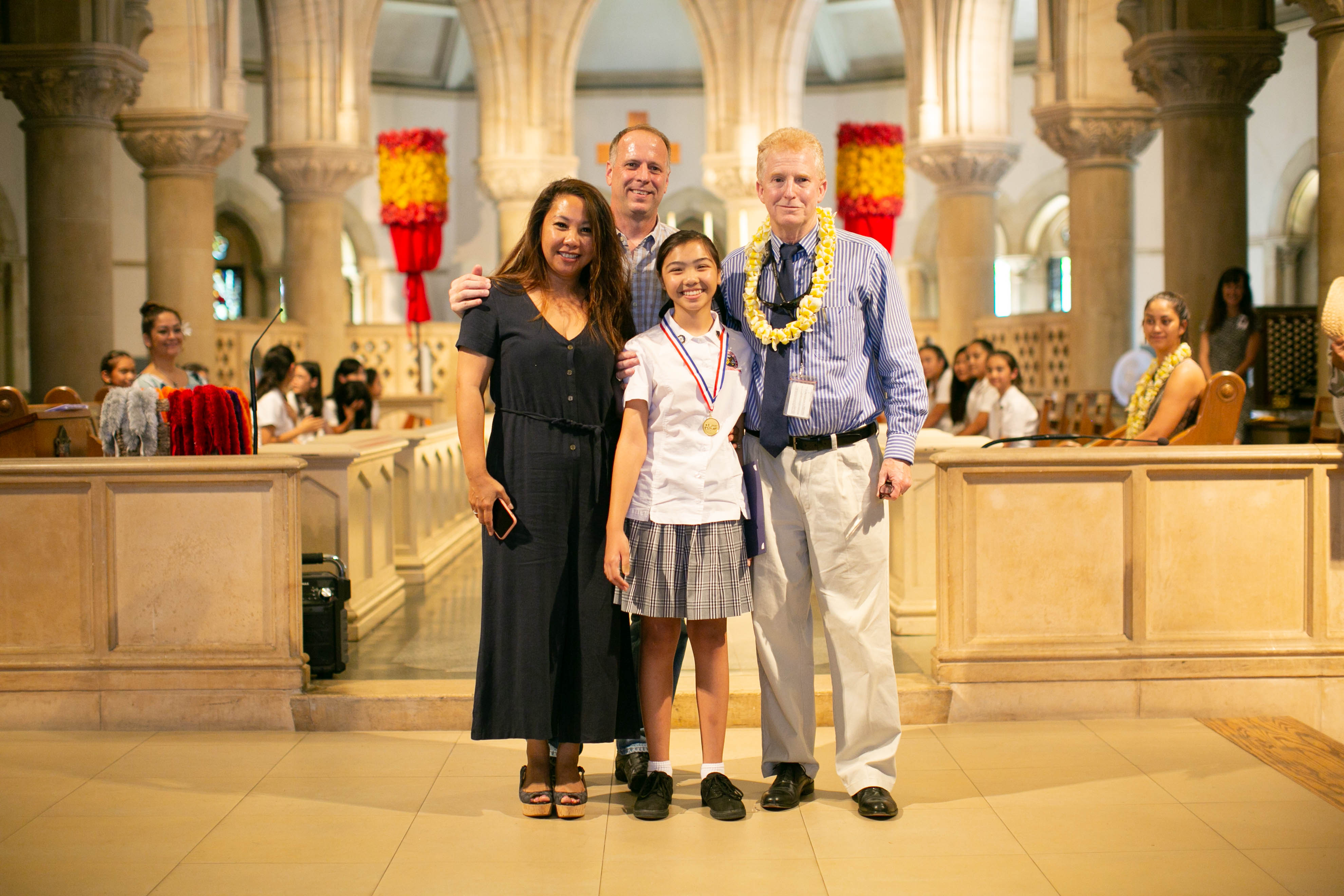 The Lower School awards ceremony was chock-full of citizenship Hawaiian value and specialty class awards. It also recognized the school spelling bee and geographic bee finalists and robotics participants. This year's basketball stars were recognized by their coach Navi Navarrete for their participation with the Christian Schools Athletic League.

A special guest made an award presentation during the awards ceremony. The Honorable Judge R. Mark Browning, Chief Judge of the First Circuit Court, announced that the 2019 Law Day Art Poster Award winner was Morgyn Bunton. She was presented with a medal and a certificate. Her artwork, which was designed within the theme of "Free Speech, Free Press, Free Society," will hang in the courthouse.

The Lower School's award ceremony wrapped up with a beautiful vocal and ukulele rendition of "You are My Sunshine" and "This Little Light of Mine" performed by the 5th grade students, followed by the hula "Ha'aheo." The entire K-5 student body then sang "'Ōiwi Ē."

Lower School parents and 'ohana made their way over to Sellon Hall to view their daughter's work in classrooms at the Exhibition Fair. The second grade class also had their year-end class party at this time. Those able to stay had lunch with the girls in Ylang Ylang Courtyard.

The Priory Upper School Shines Bright
The school day wrapped up with the third and final awards ceremony. The Upper School's Award Ceremony was a beautiful representation of the many strides made by our students in middle and high school throughout the school year.

The awards ceremony got underway with a beautiful oli. Students in grades 6-12 joined voices to sing "Eō Ke Kuini 'Emalani." Upper School Principal Nichole Field welcomed attendees to the Cathedral, which was filled to capacity. 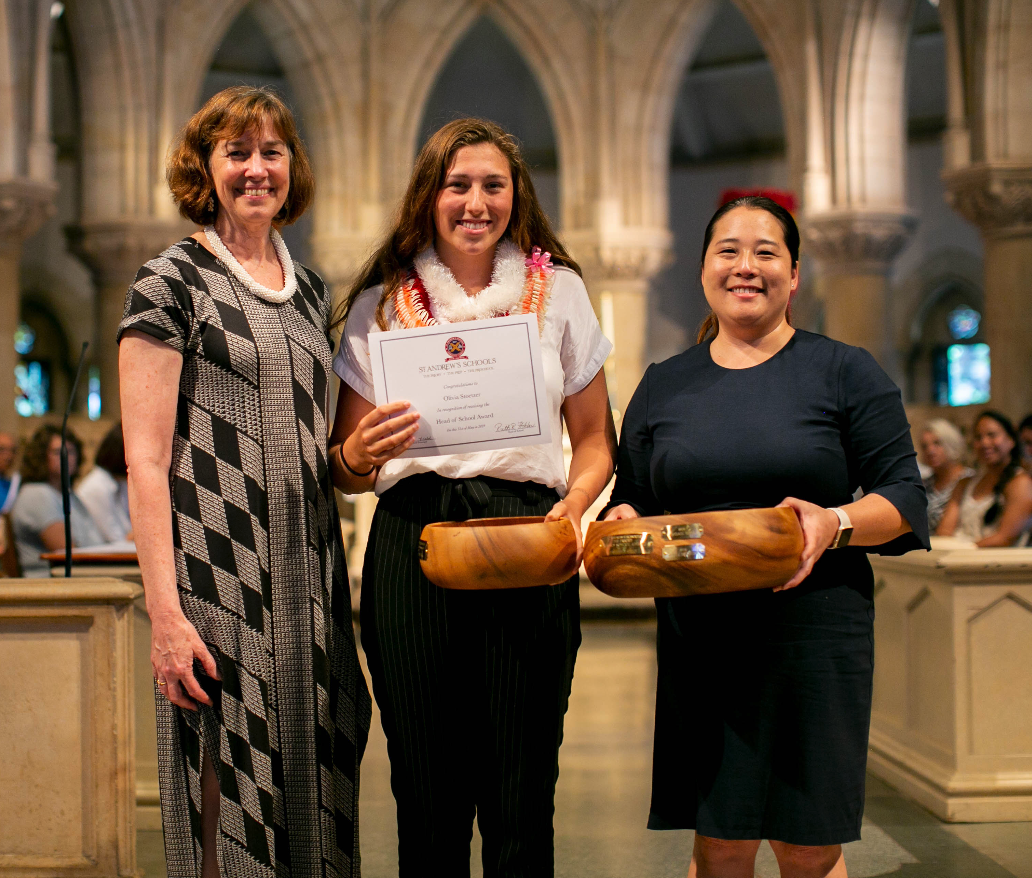 "Following the tradition of our founder, Queen Emma, whose motto 'Kulia i ka Nu'u' means Strive for the Highest, today, The Priory is honored to recognize students who exemplify Queen Emma's vision of excellence," Mrs. Field said.

Mrs. Field went on to emcee the ceremony, recognizing the recipients of various scholarship, fellowship, citizenship, academic, specialty and athletic awards. Special senior awards included the Outstanding Scholar award, Head of School award and Bishop's award. Middle and high school Kūlia awardees were given a pin to wear on their uniforms, displaying their excellence in specific content areas. Feelings of unity and sisterhood were felt throughout the Cathedral as classmates cheered each other on and raised their voices in excitement as each girl's name was called.

The day ended with the Upper School Exhibition Fair, which was sprawled across campus. More than 100 arrived after the school day had ended to view numerous projects in the fields of science, technology, engineering, art, math and social science. The evening began with a welcome from Dr. Fletcher, followed by performances from The Priory's Select Wind Ensemble, Theatre, Choir and Orchestra students.

Parents, families and community members enjoyed perusing the exhibits – including design thinking presentations, artwork, independent inquiry and science projects and documentaries – while enjoying refreshments, and learning more about social and emotional learning and RULER. A special feature was a lei-making demonstration by Hui Hau'oli.

The entire day was a true representation of St. Andrew's vision for students to learn and grow – to be their personal best, engaged in the world and inspired to make it more humane and just. 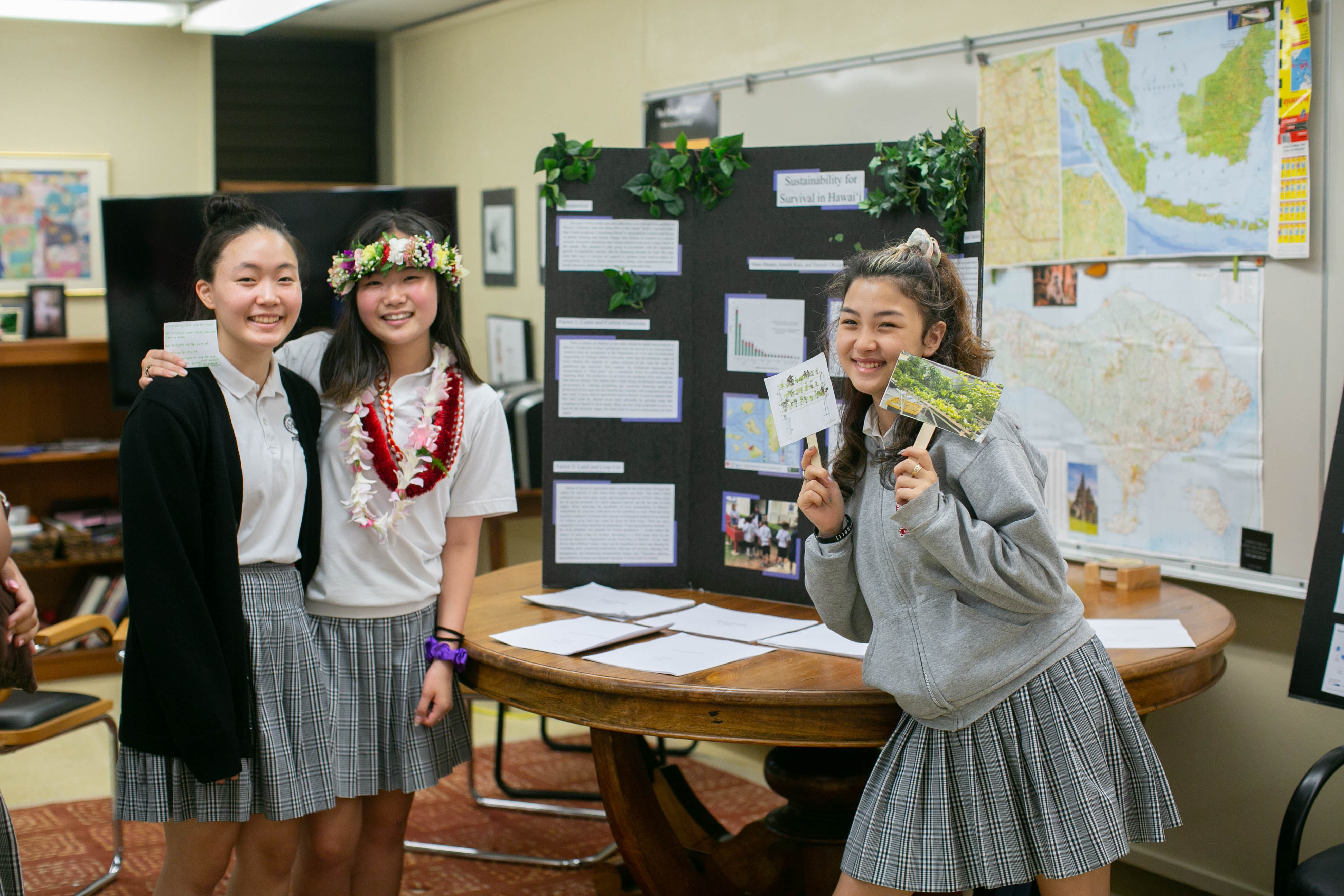