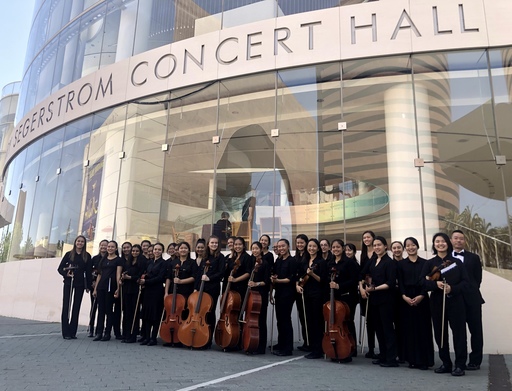 Under the direction of Orchestra Director Chad Uyehara, The Priory at St. Andrew's Chamber Strings had a busy spring break. Over the course of nine days, 29 students and four chaperones traveled to Los Angeles to take part in multiple opportunities that sharpened students' musical and social skills.

The end of the trip came with exciting news as the group garnered several prestigious awards and received invitations to two upcoming elite performances – Festival of Gold and Festival at Carnegie Hall. The awards were announced following the group's competition in the WorldStrides OnStage Hollywood Heritage Festival March 28-31. The group garnered a first place Gold ranking in the String Orchestra division, an Adjudicator Award for scoring at least a 92/100 and an Outstanding Orchestra Award for being the highest scoring string orchestra.

This year marks the second time The Priory's orchestra – which is the only all-girls orchestra in the state – also took top honors at the festival in 2017. This year's performances were Prelude and Air from Edvard Grieg's Holberg Suite and Bohemian Rhapsody by Freddie Mercury, arranged by John Berry.

Mr. Uyehara says that trip was organized to give students experience with performance and working in a different environment and with different teachers. Mid-way through the trip, he realized it gave them so much more.

"This was real-life education for all and gave them a taste of a professional musician's life," he says. "We packed in many hours of rehearsal and performance into a short period of time. We had long days, going to bed late and getting up early. We took a tour bus from place to place and lived out of three different hotels, hauling our suitcases, bags, and instruments everywhere. We had tears of joy and tears of pain. There were times when we didn't get along and made mistakes, but we pulled together when needed, resolving tensions through discussions and apologies."

In addition to participating in the Hollywood Heritage Festival, the group also performed in the WorldStrides OnStage Festival of Gold in Los Angeles, held at Segerstrom Concert Hall. Students experienced sight reading and rehearsing music, recording tracks, then setting these tracks to film during a Disney Performing Arts workshop called Soundtrack Session: Instrumental. They also attended a concert by the Los Angeles Philharmonic in Walt Disney Concert Hall. See the event program from the Festival of Gold here.

"We performed in a variety of spaces, from the beautiful Segerstrom Concert Hall to a soundtrack studio setting at Disneyland," Mr. Uyehara says. "We received both praise and harsh criticism for our performances. We supported other musicians by attending a performance of the Los Angeles Philharmonic at the amazing Walt Disney Concert Hall. Like the Billboard Charts or Grammy Awards, we competed for rankings at the Hollywood Heritage Festival and earned first place Gold, among other awards."

There was also some room for fun as the musicians enjoyed some free time at Disneyland and Universal Studios. "We celebrated at Disneyland and Universal Studios," Mr. Uyehara says. He continues, "I am extremely proud of everyone for making it through the past nine days. Through all of this, we became better musicians and better people. Life, like music, is full of ups and downs, tension and release, pain and joy."

Congratulations to Mr. Uyehara and our talented students for your accomplishments and for living our school's motto to Kulia i ka Nu'u – Strive for the Highest.View 2019 Festival of Gold program here.