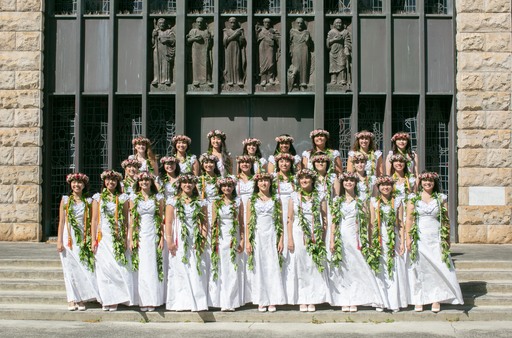 It was an evening thirteen years in the making for the 26 young women who walked up the aisle of The Cathedral of St. Andrew's first as seniors and then back down as high school graduates at their commencement ceremony on June 9. Adorned in beautiful white Hawaiian-style gowns and haku lei, with their families, friends, and teachers in attendance, the Class of 2019 stood side-by-side as a class one final time before parting ways to continue their individual journeys.

The evening began with Kumu Hiwa Vaughan greeting the graduates with an oli. The girls then sang "Eō Ke Kuini" in honor of our school's founder, Queen Emma Kaleleonālani. The graduating class and school community, including Board of Trustees members, then processed to the front of the Cathedral to sing "Hawai'i Pono'i" and "The Queen's Prayer."

Senior Class President and Outstanding Scholar Natalie Wong gave an emotional speech that emphasized her appreciation for the school and for the gift of a Priory education. Wong noted that her story began in China where she was left on the street a few months after she was born. She was sent to an orphanage and was fortunate to be adopted at the age of two by parents who brought her to the U.S. and enrolled her in The Priory when she was ready to start school.

"The Priory has given the Class of 2019 an invaluable education, preparing us to confidently go out and work to be successful," Wong said. "With an all-girls environment, our class learned to collaborate and to support each other. Encouraged each other to speak out. Nurtured each other and looked out for one another. We learned to be gentle yet assertive and be good people. At The Priory, we have grown into strong and independent young women who have been given the tools to succeed in whatever we do. We are the world's next set of teachers, healthcare professionals, astronauts, world leaders, librarians, scientists, and artists."

The graduates sang their class hymn, "Wonder," and Olivia Stoetzer delivered the farewell address. She referenced a TED Talk by Emily Esfahani Smith, a psychologist who has spent years studying the keys to happy. Stoetzer correlated the four pillars Smith outlines – belonging, transcendence, storytelling and purpose – to lessons learned at The Priory alongside her 25 sisters. She finished her speech with a powerful quote and a charge for her classmates. 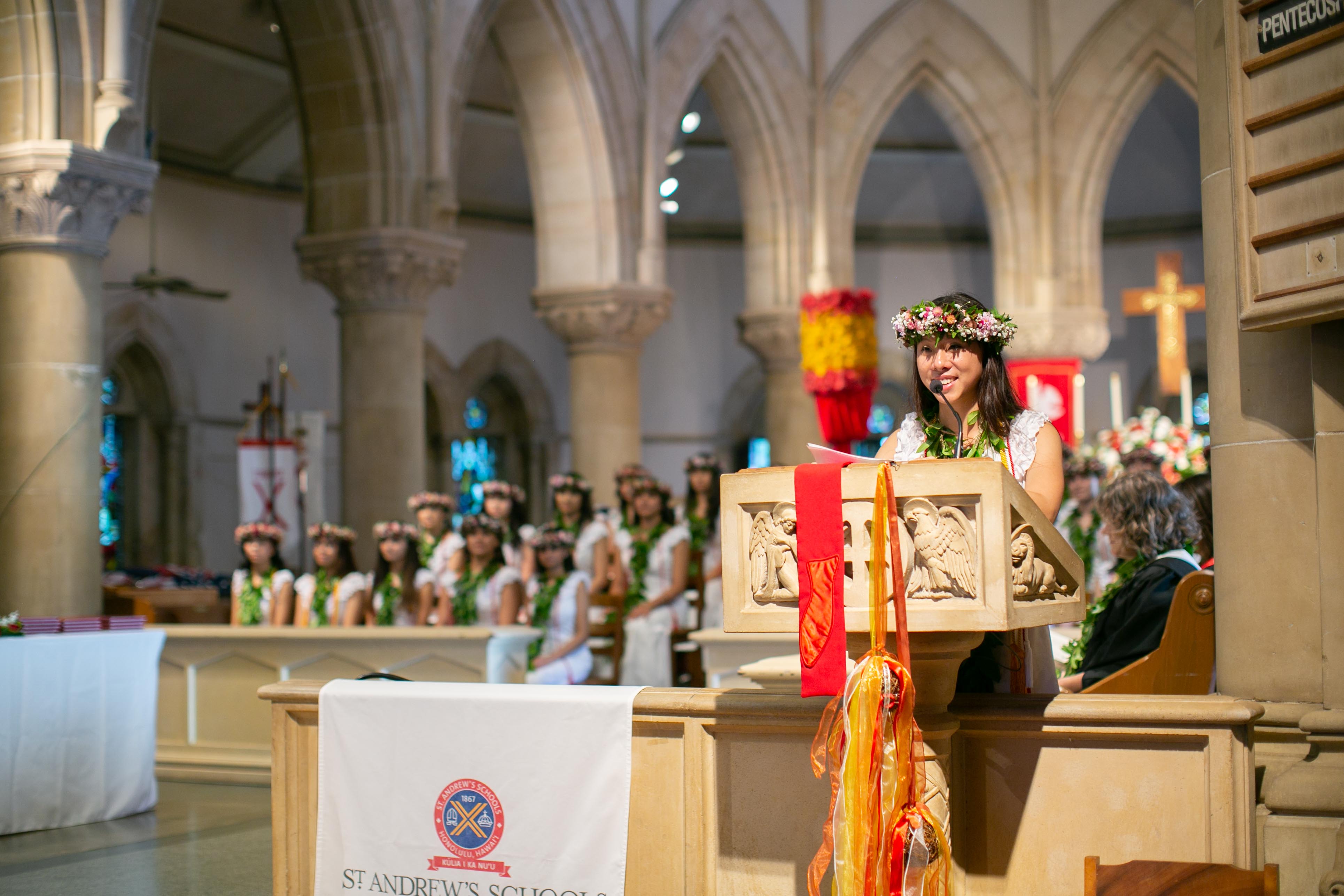 "I would like to conclude with the words of Charles Dickens," Stoetzer said. "'The two most important days in your life are the day you are born and the day you find out why.' Class of 2019, let's find our reason why."

Several alumnae in attendance received special recognition. The milestone classes of 1959, 1969 and 1979 welcomed the newest members of The Priory alumnae community.

The Class of 1969, which held its 60th class reunion the previous weekend, had a strong showing of 30 attending commencement, including Queen Emma Alumnae Award recipient Sue Ann Wargo. The Class of 1969 continued their celebration with one final bash – a reception on campus following the graduation ceremony. 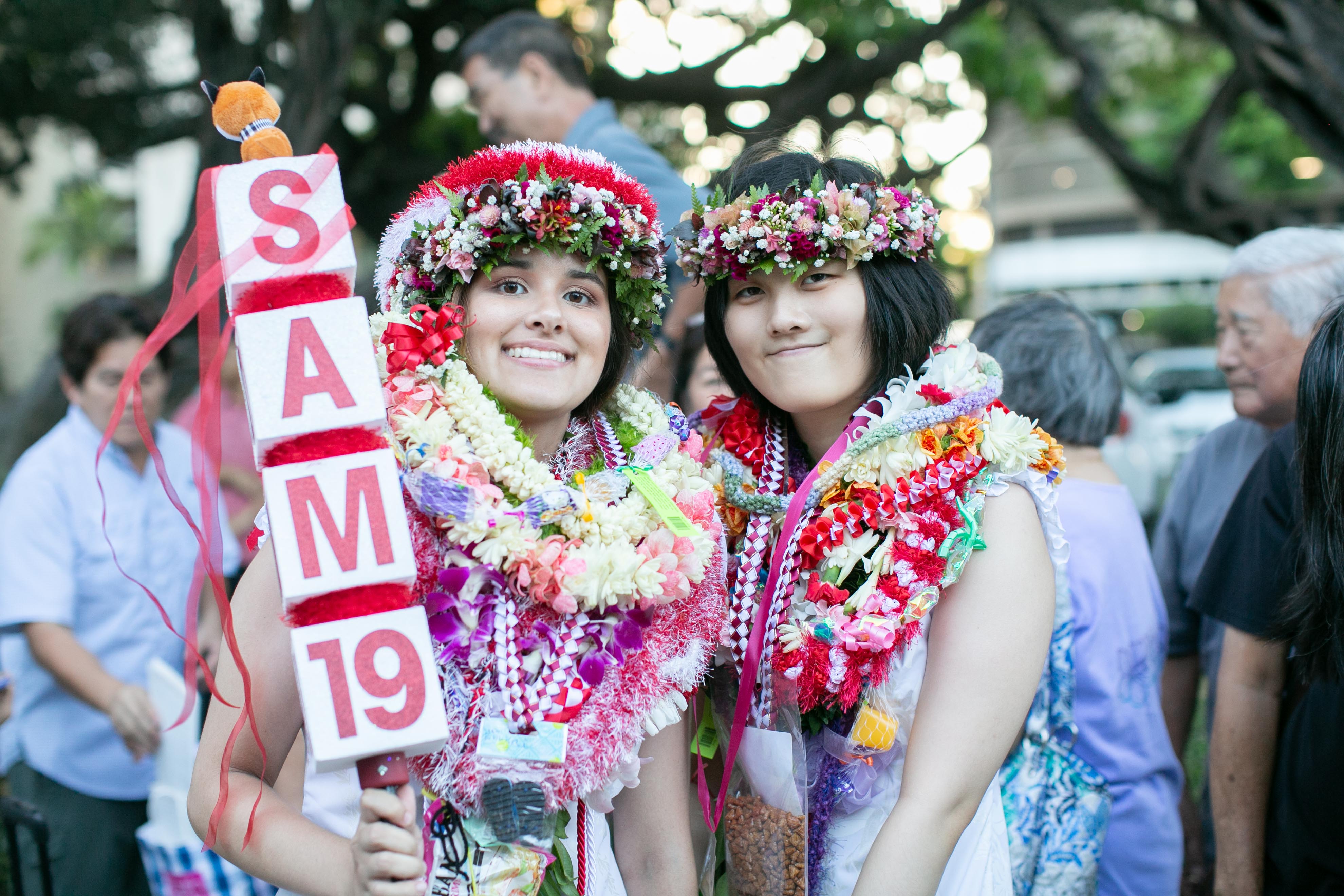 A special highlight of commencement was the recognition of each student by the school leadership. Each member of the senior class was asked to stand as Head of School Ruth Fletcher, Ph.D. and Upper School Principal Nicole Field described what was special about her, based on their personal knowledge as well as the fond memories of the faculty.

"Your class is a beautiful tapestry of gifts and talents woven together by your time at The Priory," Fletcher said. "You know yourself and each other and have challenged yourself to achieve your personal best while you were here. More importantly, you have formed a strong sisterhood.

"We truly believe that more strong, confident, competent, and courageous women leaders are needed in the world...and we want that to be you," continued Fletcher. "We have great faith in you and know that you will use your gifts and talents for the greater good. And we encourage you to create the conditions for growth for yourself and others wherever you go."

The 26 seniors sang their class song, "For Good" from the hit Broadway musical, "Wicked." Fletcher was then joined by Patty Foley, chair of the St. Andrew's Board of Trustees, and Bishop Robert L. Fitzpatrick in conferring the diplomas. Each Daughter of The Priory also received a rose, signifying that their journey at St. Andrew's began in kindergarten.

With diplomas in hand, the new graduates emerged from the Cathedral. In a longstanding Priory tradition, they stepped up onto the edge of the fountain to sing one more song together. As they joyfully belted out a verse from Journey's "Don't Stop Believing," their exuberance was shared by all those present for their special moment. Proud family members and friends embraced the girls, adorning them with lei, flowers and other creative decorations symbolizing this last event of their high school careers.

The entire evening was filled sweet sounds, sights and smells – countless memories in the making as the graduating class celebrated their sisterhood, their accomplishment of finishing high school and reaching a milestone in their lives. Queen Emma would be proud of each girl's individual talents and successes as she heads out to make her mark on the world.