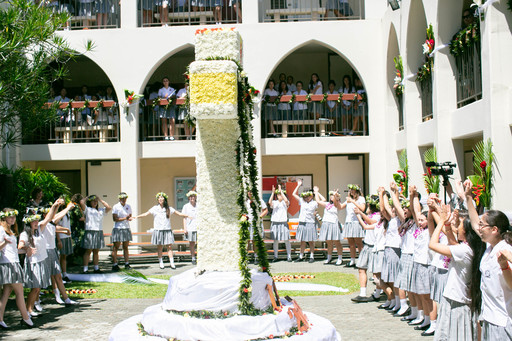 Ascension Day was held on May 16 and was a celebration that will surely resonate in the hearts of the St. Andrew's Schools' 'ohana. Perhaps the biggest impact was on the minds and the heart of the Class of 2020 as it is the junior class who plays a pivotal role in this cherished tradition, which is nearing its 152nd anniversary at The Priory.

Ascension Day is celebrated 40 days after Easter and commemorates the day Jesus Christ ascended into heaven. The celebration is also St. Andrew's Founder's Day; Queen Emma Kaleleonālani founded the school on Ascension Day in 1867, which fell on May 30 that year.

Service First
Students, faculty and staff, parents and alumnae made their way into The Cathedral of St. Andrew to begin the day with a special service. Chaplain Annalise Pasalo delivered the sermon in child-friendly language, explaining the significance of Ascension Day. She told the congregation that before Jesus went to heaven, he left the people with a special message.

"He said, 'Now it's your turn to take what I taught you and to take this good news, to take this message of love and share it with the world,'" Chaplain Annalise said. "He left us with a commission to help each other and to be the teachers." 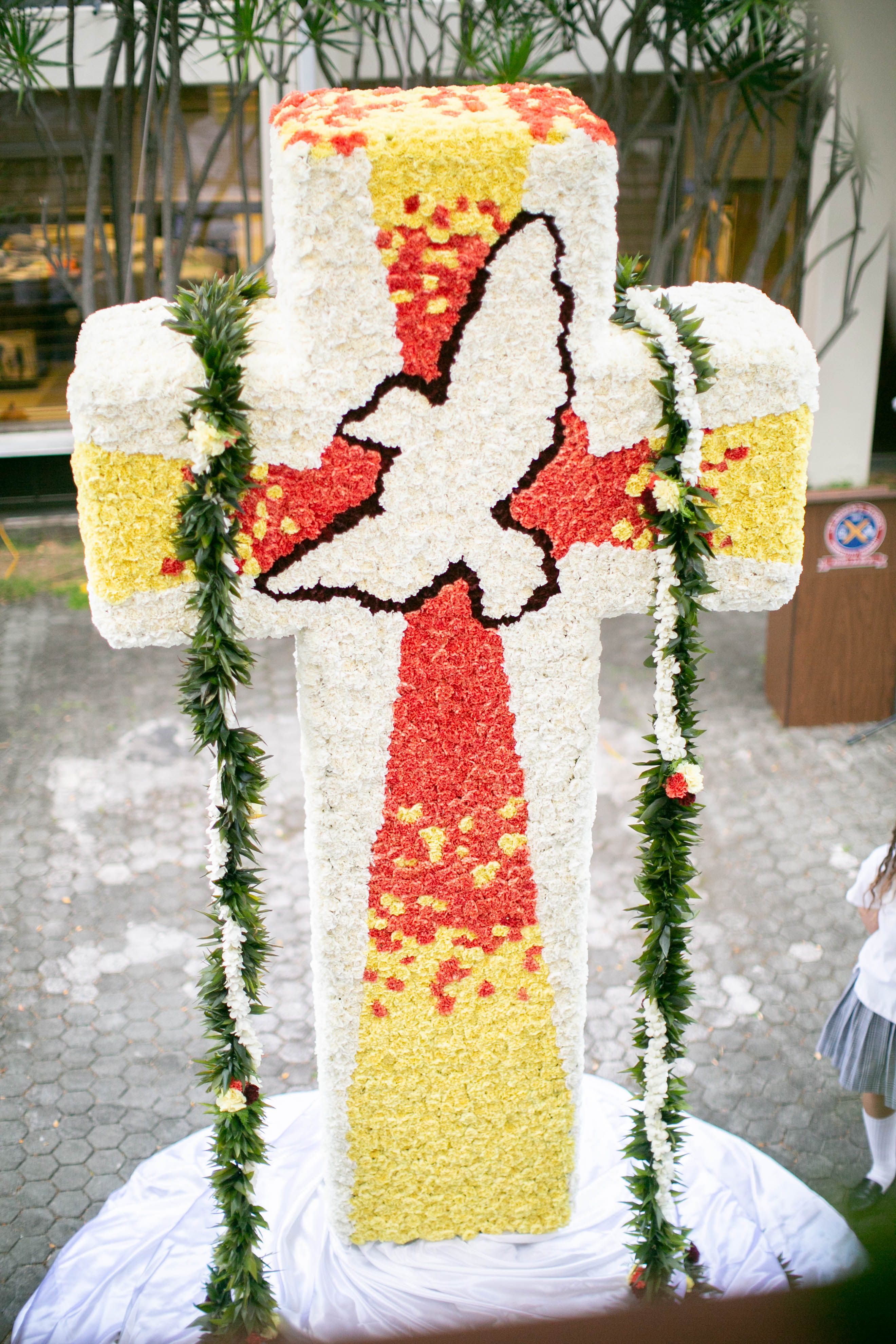 She also spoke of the school's founding and how if it weren't for Queen Emma, Mother Sellon and the Sisters from the Society of Holy Trinity, The Priory – as well as The Prep and The Preschool – would not exist today.

Chaplain Annalise explained the symbolism of the cross, that the arm that goes up and down is the way that God loves us and that the side to side arms reach out to the world, to love all people.

The service ended with the congregation taking Holy Communion. The school community and the clergy then participated in the procession from the Cathedral to Robinson Courtyard to continue the celebration.

Burning the Midnight Oil
The junior class ­­had spent the previous night in the courtyard busily preparing the Coral Cross – a 9-foot fixture that has been at the school since its founding in 1867 – for its great unveiling on the morning of May 16. This longstanding tradition is highly anticipated by students, staff and event attendees.

There is a strict social media embargo in place, making the suspense and ultimately the first glance that much more special. Cell phones were placed in a cardboard box before the decorating began and no one went to sleep until 2 a.m., when the cross was completed and everything was cleaned up.

Under the direction of class advisors Ai Hirasuna and Alethia Donathan, the 31 members of the junior class used more than 6,000 carnations and roses (Queen Emma's favorite), delicately placing them into a frame constructed around the cross to hold the flowers in place according to the design. The stunning display featured a dove in the center and shades of red, yellow and white. The cross itself is made from fossiliferous reef rock from the Waimanalo High Stand and is approximately 125,000 years old. A close look reveals ancient corals, clams, oysters and snails.

"The Coral Cross represents our relationship with each other over time. Whether adorned in flowers or in its natural state – it calls on each of us to take care of the planet and the people on it," Head of School Ruth Fletcher said. "It symbolizes our connection to Queen Emma, our Hawaiian heritage and Episcopal faith. It connects us to each other and our many alums and calls each of us to 'Strive for the Highest' in all that we do." 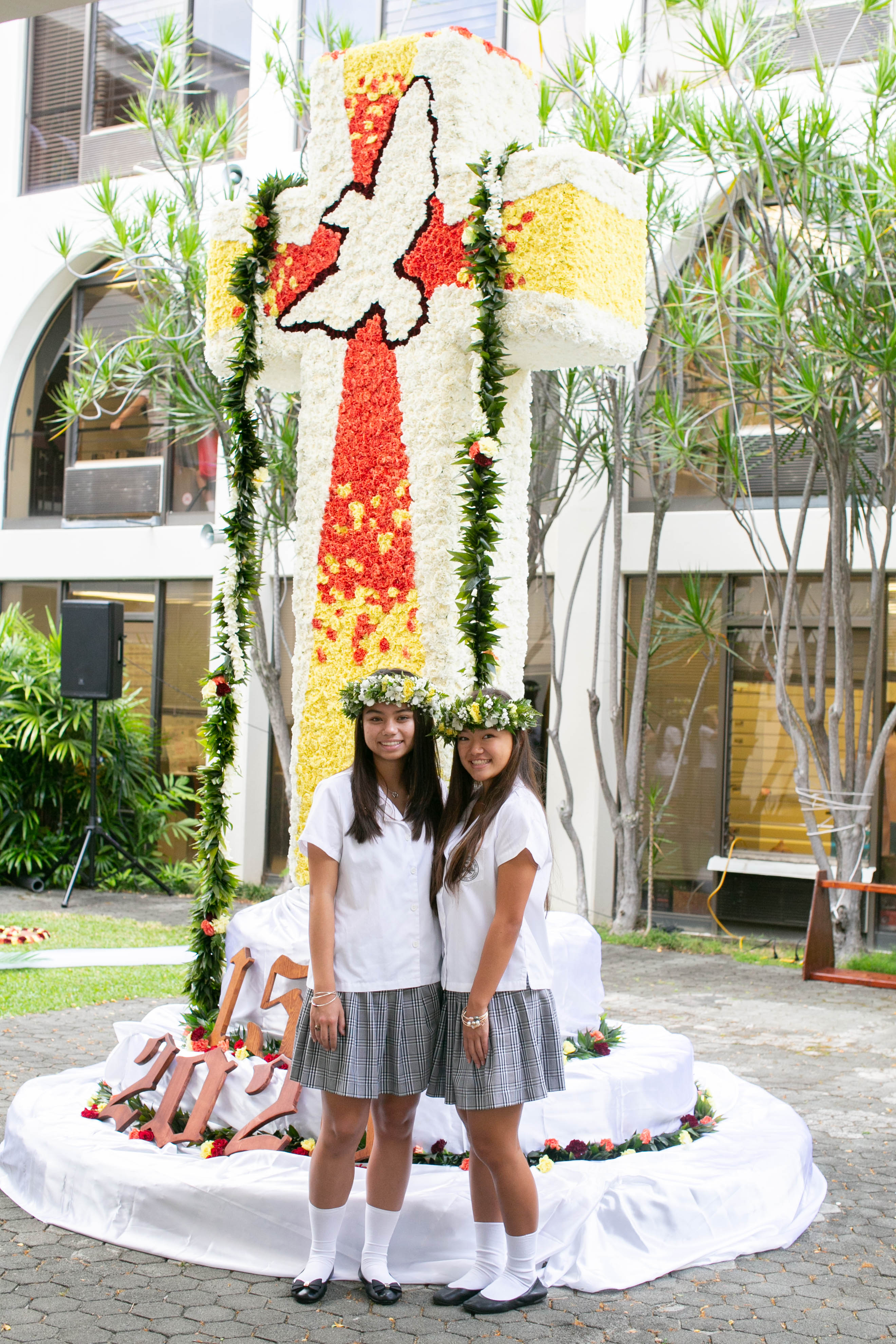 This year's design was created by Kira Terada '20 and Maddie Toyama '20. The girls explained the symbolism behind the design and how the day is a representation of multiple facets.

"The central image of our cross is the dove," Terada said. "The dove is not only a symbol of peace but also serves to represent the image of the Holy Spirit and Jesus ascending into heaven. Surrounding the dove is a burgundy shadow and it represents how we, as strong women, are able to overcome challenges in our lives. Queen Emma has taught us to embrace challenges and to use them to strengthen ourselves."

The Coral Cross ceremony on Ascension Day is a special time that connects the junior and senior classes. The senior class stood on the risers on the left of the courtyard; the juniors stood on the right. Through tears, the Class of 2020 sang "Remember When" to the seniors. Following the juniors' song, each member of the class embraced members of the senior class and presented them with lei and passed on heartfelt messages of gratitude, encouragement and well wishes for the future.

In return, the Class of 2019 performed "For Good" for the juniors. "You'll be with me like a handprint on my heart," sang the seniors. "And because I knew you, I have been changed for good."

Jennifer Burke, director of institutional advancement and development, announced this year's Queen Emma Alumnae Award recipient: Sue Ann Wargo '69. Burke shared that in addition to being her colleague, Sue Ann was also her first grade teacher and that she fondly remembers her as "Mrs. Wilson." 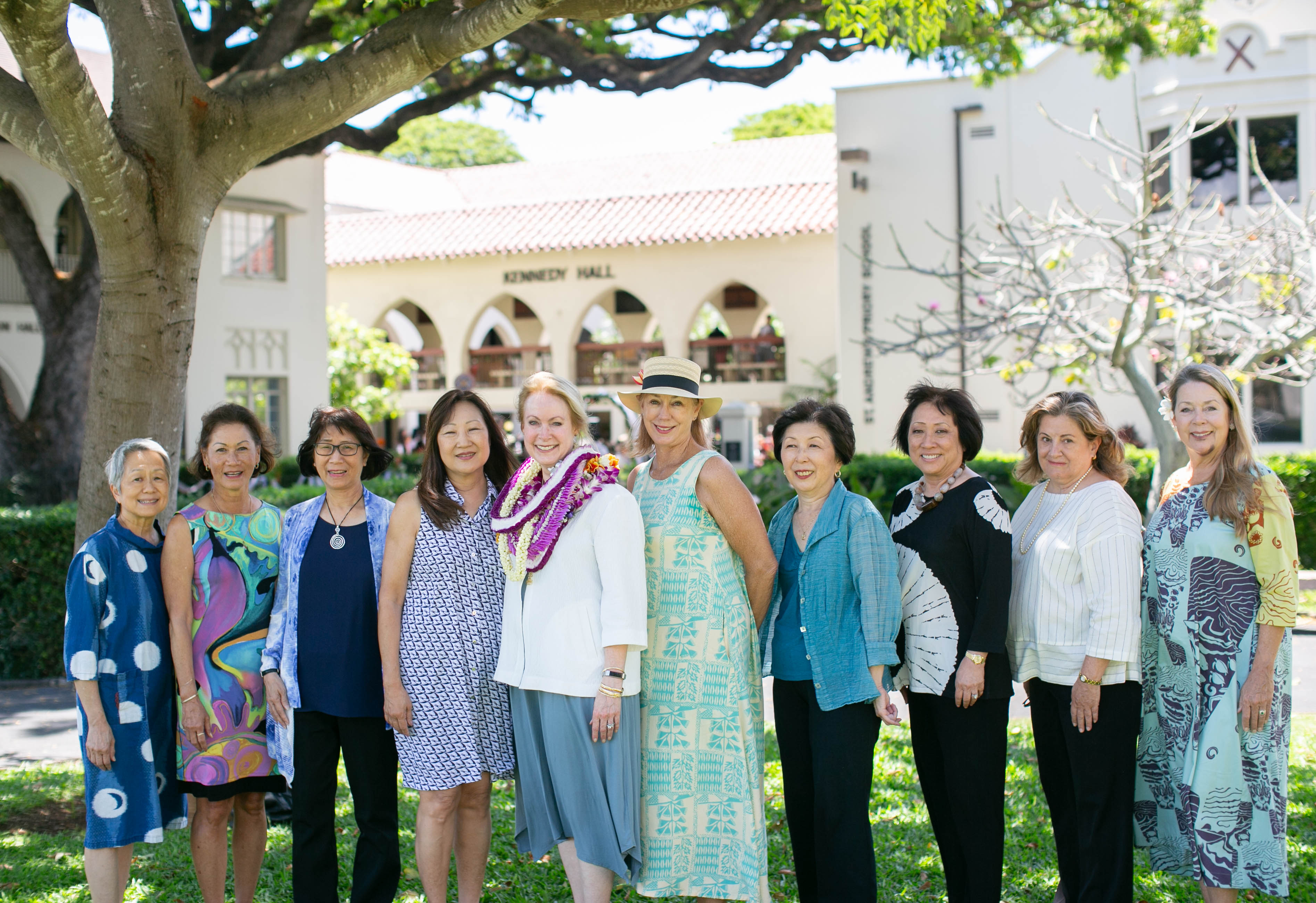 When Wargo's name was announced, there were roaring cheers and a standing ovation from guests. Wargo was adorned with so much lei she was barely able to see from underneath the aromatic mass when she made her way to the podium to receive the award and give her remarks. It was then unveiled that the Class of 1969 successfully raised more than $50,000 to gift to the school in celebration of their 50th reunion! This is a major accomplishment of the class representatives from the Class of 1969 after many years of planning and grassroots fundraising.

Following the award presentation, the alumnae enjoyed a lunch buffet that was catered from Highway Inn as they caught up with one another and enjoyed laughs, memories and fellowship.

Ascension Day was one filled with memory-making, reflection and gratitude as our school 'ohana reflected on its spiritual values and paid tribute to Queen Emma's vision for students to become educated in a caring environment that nurtures Episcopal values and is rooted in Hawaiian heritage.