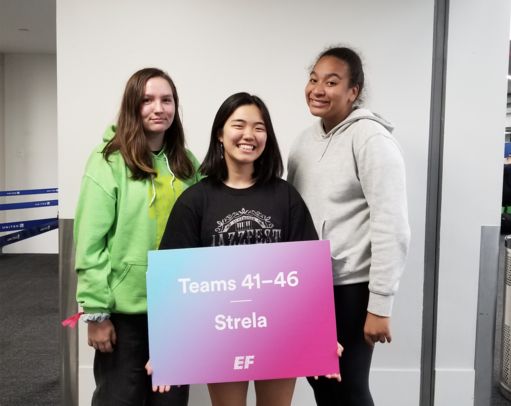 What if there were a gadget to help distractible students stay focused and retain information learned in the classroom? There could be one soon, thanks to the creative thinking of eight high school students who were strangers at the beginning of a weekend and winning teammates by the end.

Mayuko Ikeda '21 was one of those students. During a Leadership Conference in Davos, Switzerland, her group used design thinking to create an ingenious protype – a smart earpiece called "SpacedIn" – which addressed the challenge of "how to harness the power of communication to create meaningful change." Her group's winning project is now on display at the Nobel Prize Museum in Stockholm. 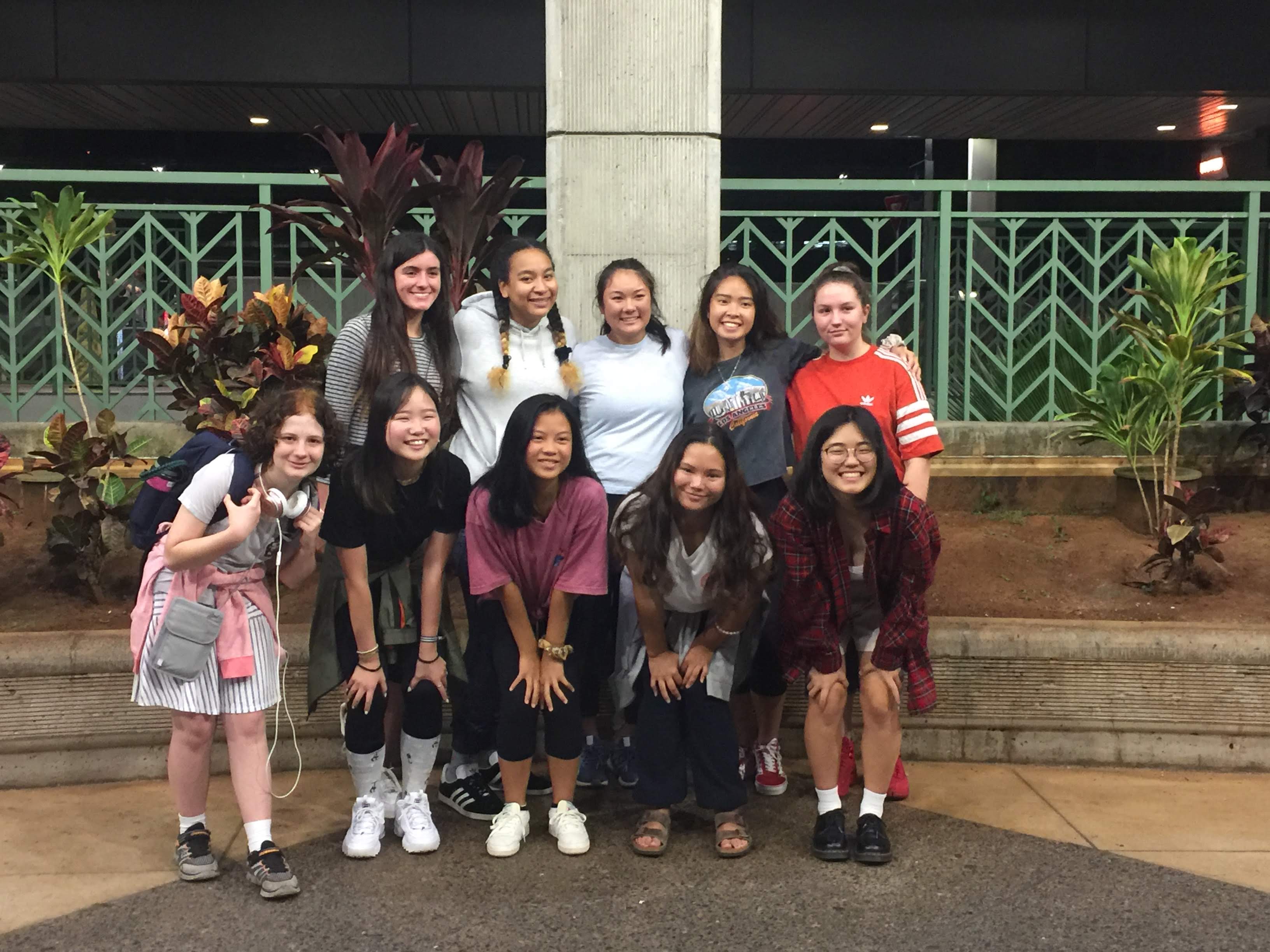 Mayuko and nine of her Priory classmates, along with faculty chaperone Alethia Donathan, toured Europe as part of the summer Global Leadership Summit. Three days out of the of 11-day trip were spent at the conference, which took place from July 12-14.

"This was a great experience for our students to be global learners," said Ms. Donathan. "Not only did they meet other young people from all over the world, but they were immersed in a conference that gave them a task and they had to come up with a solution. Everyone had different ideas and together, they used problem-solving and design thinking to come up with those solutions."

More than 1,800 conference participants spent long and rigorous days at the conference. Each day started at 8 a.m. and went until 7 or 8 p.m. The morning started with students learning about the power of communication from keynote speakers, ­including journalist Ann Curry and writer Clint Smith. The students then broke out into their groups and participated in "Innovation Village" for several hours. They worked together on developing a product protype that would provide a solution to a common problem of their choosing.

Get SpaceIn, Not spaced Out

During Innovation Village, students came together to form 147 teams to compete. Mayuko's team consisted of seven other students from diverse backgrounds hailing from around the globe. The American, Italian, Spanish and German teenagers developed SpacedIn to help their fellow peers who had trouble focusing in school. The earpiece fits behind the user's ear and comes in a variety of colors. When in use, it emits a vibration to remind the user to focus and also records conversation to improve communication. Watch the winning pitch here.

"SpacedIn is an earpiece that will allow you to stay engaged in your conversations by tracking alpha and beta brain waves," Mayuko said. "If your mind starts to space out, it will send a vibration to bring you back to help you improve your communication with others. We all know how awful it is to space out during a conversation, presentation or even a speech. You can end up feeling disconnected, which frustrates yourself and others." 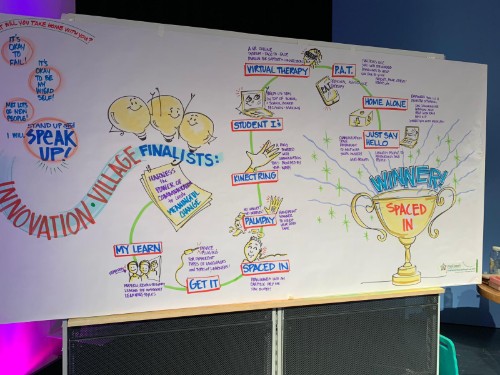 Two other students from The Priory – Sara Lepis '21 and Daelia Wong '21 were on one of the nine teams that made it to the semi-finals.

Sara's team included students from Spain and Germany. They created a prototype for glasses – called Eyeling – to help tourists who don't speak the language of the country they are visiting. The glasses transmit the words that are spoken and then translate them in one of 600 different languages onto the inside of the glasses.

Daelia's group invented "Pictonotes," a tablet that helps students to learn based on their different learning styles. If the person is a visual learner, the tablet converts the document and adds visual images instead of text. If the student is an audio learner, it speaks to the individual and he/she repeats back the information.

"The summit in Davos about 'The Power of Communication' really allowed me to open up to new ideas and not only taught me how to work better in groups, but to also make new friends around the world," said participant Michelle Ho '21.

Hannah Okuda '21 added, "This conference taught me that communication is the most powerful tool for youth to lead the world."

Communication at the Core 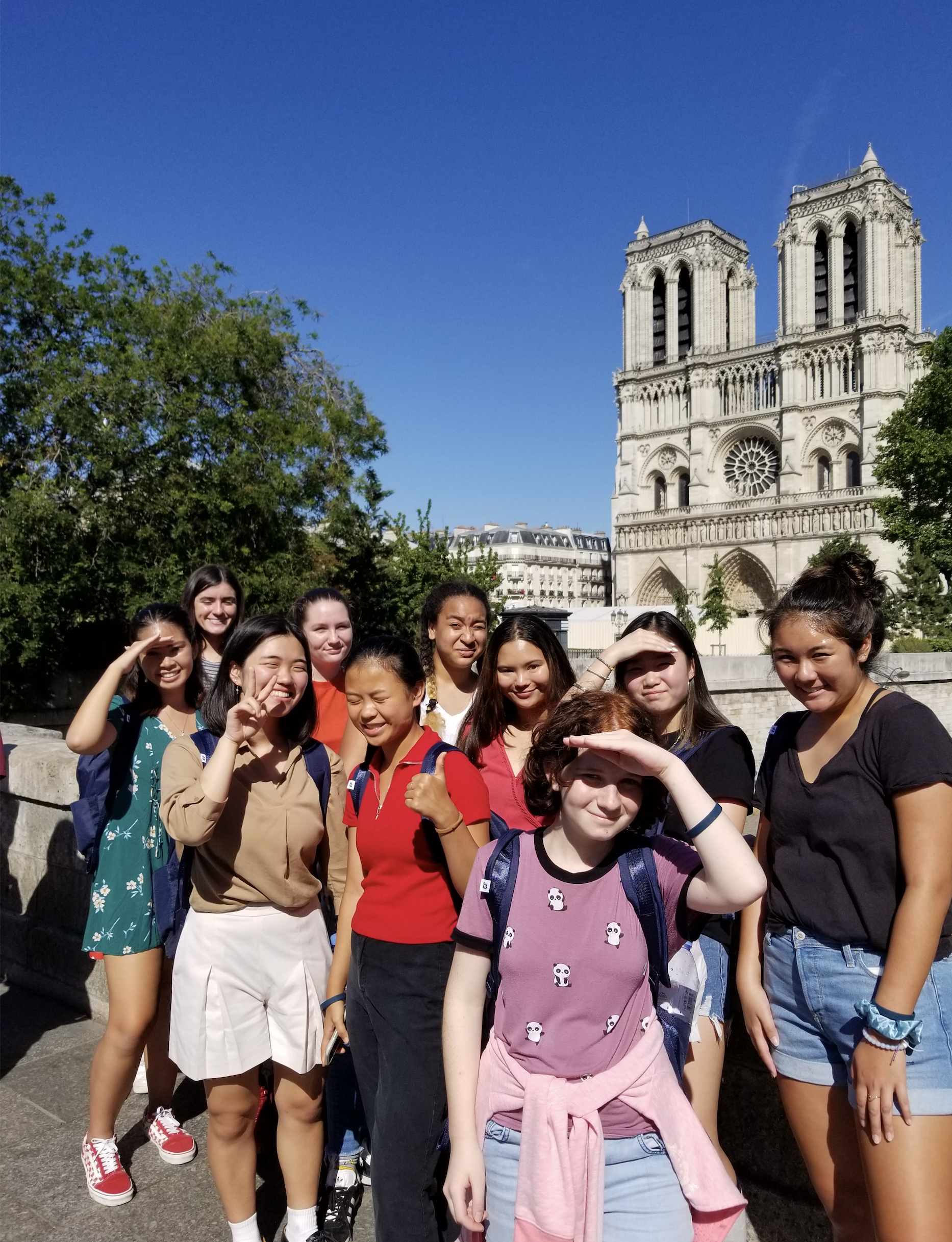 The Global Leadership Summit's theme was "The Power of Communication." As the St. Andrew's group traveled across Europe, the theme was brought to life. The students gained knowledge and hands-on experience through cultural activities.

"Art has always been one of the most meaningful ways we communicate and react to the world around us," said Ms. Donathan. "No country has a richer art tradition than France, and Paris' famed museums showcase many of its finest achievements."

The students explored iconic landmarks such as the Eiffel Tower, Arc de Triomphe and Notre-Dame. They toured Musée d'Orsay and its impressive collection of Impressionism art and the Louvre Musuem, which was built to defend the city in the 13th century. Today, it is home to masterpieces such as the "Mona Lisa" by Leonardo da Vinci, "The Winged Victory of Samothrace" sculpture and "Venice de Milo" statue.

The students also visited the home of Claude Monet in Giverny, participated in a traditional French cooking class, spent one morning drawing in the Luxembourg Gardens, took a walking tour with a local resident in La Marais, had a guided walking tour of Paris' street art with a local artist and created food art at the Centre Pompidou.

From Paris, they traveled through Zurich on their way to Davos for their summit. Located in Graubunden, Davos is more than just an Alpine resort town known for its stunning views. It's also a hub for innovation and home to the annual World Economic Forum meeting where global leaders come together to discuss pressing issues.

The trip left a lasting impression on the entire group and taught everyone a valuable lesson of the significance of expanding our world beyond our communities, state and country.

"I learned that strangers can become close and create great things in the span of only a few days," said Mayuko.