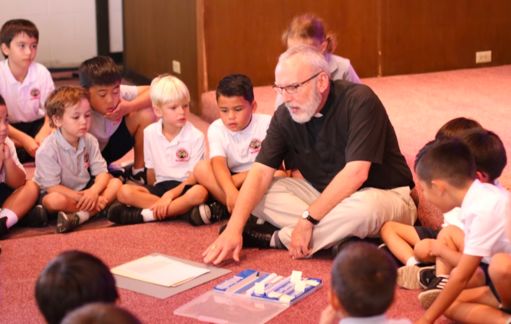 Traditions are an important part of our history and have helped to shape who we are as a school community and in some, who we are as people. Traditions here are rites of passage and forever live in the memories of generations of students. Last year, Chaplain Annalise Pasalo saw the need for tradition at The Prep as it continues its growth and as a result, gave students the opportunity to be the pioneers of a new tradition that would be unique to them and help to shape their identity. This new tradition was Lego® Chapel.

"I really wanted our boys to have a welcome chapel that was their own tradition," Pasalo said. Using Matthew 7:24-28, "House on a Rock," as it's guiding principle, Lego Chapel is the first Prep chapel service of the year and sets the stage for the new year to come. "I wanted us to build a foundation for our community as a school," Pasalo said. "It will be based on respect, love and kindness. These are important things to remember because they create a strong community and to have a community, we need people."

In Lego Chapel, like the story, the students lay bricks to first build a solid foundation and then gradually form the Lego tower. The foundation layer is meant to represent the school and The Prep's values. "This is our foundation on which we build our community," Pasalo said.

With Chaplain Annalise now on maternity leave, this yearʻs Lego Chapel was led by Bishop "Bob" Fitzpatrick and so, on the morning of September 10, all six classes of The Prep filled the pews of Monteiro Chapel for their first service of the year. Bishop Bob introduced himself as he greeted his young congregation and in the spirit of unity, asked if the boys could join him on the floor, forming a circle. The boys, more than willing to try the new seating arrangements, spread out. A relaxed energy immediately blanketed the room making "chapel service" feel more like a conversation among friends.

"What would happen if you tried to build a Lego house in the bathtub and then turned on the water? What would happen to your house?" Bishop Bob asks. "It would wash away, wouldn't it?" With a sea of head nods and a few poignant explanations on the theory of floating blurted out by a couple of fifth graders, Bishop Bob begins to tell the story, "House on a Rock."

"Jesus said you don't want to build your house on sand because it is not stable. You want to build your house on something solid so that it won't fall down," Bishop Bob explained. He went on to uncover the metaphor of what the "house" and "rock" actually represent and brought it full circle by giving examples of how the boys can begin to build their lives on rock— by being a good friend, telling the truth and being kind.

Then he announced that they'd be building a Lego tower and instructed each student to find the brick with their name written on it. When called, each student added their brick to the Lego tower. He first called upon the fifth-grade class because as the elders, they have the responsibility of setting the foundation for the younger ones— all other classes and teachers followed. 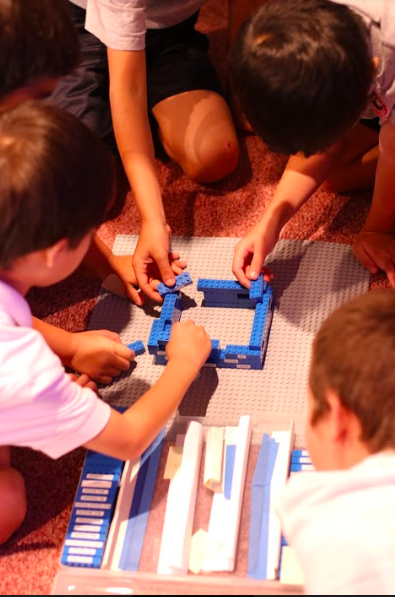 Though there were moments excited chatter and scattered movement among the students as each class took their turn, the lesson of Lego Chapel and its symbolism was learned and understood by all. "We need to build our house on solid ground. Fifth grade went first because they are the oldest. Kindergarten went last because we are the smallest," Joshua Lum, kindergartener explained. "The teachers were the fence to keep our house safe— but it's really the classroom," he said.

Teachers at The Prep appreciate this unique tradition that Chaplain Annalise started and feel that so far, it has been well received. "Lego Chapel is an exciting time for the boys— they get to use something they love to help represent how we as a community work together by building the foundation of our love of learning," says Michael Rickman, 2nd grade teacher. "The Legos are also a good representative of how teamwork makes the dream work and that we are stronger together!"