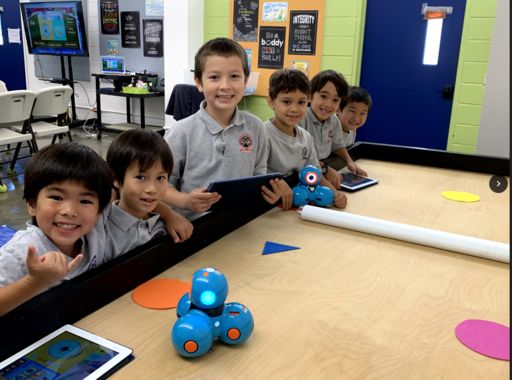 The K-5 technology classes have been working hard all year. Prep and Priory kindergarten classes started off the year with the Bee-Bot—a black and yellow robot designed to look like a bee. Bee-Bot is programmed to move through a grid by pressing buttons on its back to move it Forward, Backwards, and turn it to the Left and Right. Students move the robot to reach areas on the grid. After learning how to drive the robot, Kindergarteners made their own grid cards based on a story about a chicken who goes for a walk through the farm –"Rosie's Walk." Their Bee-Bot was dressed as a chicken and followed the path through their cards.

Meanwhile, grades 2 and 3 have been working with the Dash and Dot robots. These robots are connected via Bluetooth to an iPad. They learned to control the robots using two different apps. They also learned how to drive the robot between multiple locations, play sounds, record their own sounds, and change the colors of both Dash and Dot. They even made their robots do a dance!

Grades 3 to 5 also worked with Dash and Dot, but they were challenged to create programs with a coding language called Blockly. Dash is a very entertaining robot. It has built-in sensors, it makes a variety of sounds and can be programmed to change its colors, talk, "wink," and drive at different speeds, turning at different angles. Students used props which they had to maneuver around or push, and also learned to use loops, and events such as pressing a button or waving something in front of Dash to start the program. This month, they participated in a demo with the Middle School VEX IQ Robotics team. The upper schoolers demonstrated the robots they built and programmed for this year's challenge and even let the lower school students drive them through the course.

The students are thoroughly enjoying their technology class experience—whether programming robots or animating characters as part of a story or game. Our next stop after the break—STEAM!